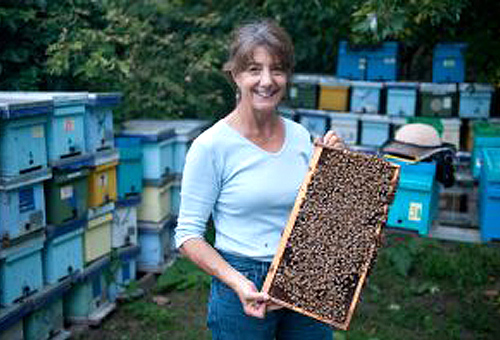 As a bee-lover, an advocate of stigmergy, a professional in sustainability and circular economy this is the kind story that I could share over and over. The leading character of my story  today is a woman and her name is Marla Spivak. If you don’t know Marla Spivak, then you should as her passion for bees, her determination to save them might also save humanity!

Marla Spivak works for the Department of Entomology at the University of Minnesota. She is a MacArthur Fellow and distinguished McKnight university professor of apiculture and social insects. Her work has been mainly focused on the immune system of honeybees, and the health and diversity of all bee pollinators. That’s where CCD comes in. For those of you not familiar with such grim acronym it stands for Colony Collapse Disorder. It is a dramatic phenomenon identified in the late 1990s which since then has been decimating the honeybee population worldwide. A particularly alarming fact considering that bees pollinate 70 of the 100 most important crops that feed around 90% of the world’s population. Bee disappearance therefore represents a critical environmental threat putting the survival of humanity at risk.

CCD is caused, among other factors, by a mite called Varroa. The parasitic mite which transfers a number of viruses to the bees, causing various disorders (deformed wings to name one) and ultimately the death of entire hives. The simple solution of using pesticides to eliminate it, would also destroy colonies. To find a non-chemical approach, Marla Spivak turned to Eltopia, an innovative agricultural communications leader. Eltopia suggested an experiment that no one else in the world had ever considered before: they developed a pesticide-free, compostable frame, embedded with sensors sending information about the status of the brood and the mites’ reproductive cycle. Called “MiteNot”, this solution raises the heat levels of the hive during the mite breeding cycle to interrupt fertilization and prevent further mite reproduction.

Gemalto, the global leader in digital security and Machine to Machine technology was also brought in to assist in the design and deployment of MiteNot, which is funded by General Mills Worldwide Innovation Network (G-WIN) and currently tested at the University of Minnesota before its commercial launch later this year.

According to Marla Spivak “Eltopia’s MiteNot project is the most innovative and holds the most promise to turn the bee crisis around than any other idea that has come along in a very long time, maybe ever”.

This is the story of different people, bringing different expertise, belonging to different organizations in size and scale, coming together to change the world. Whether to advance science, education, technology or any other field of society, the backbone of such partnerships is the value and profound respect for what each party brings to the table to contribute to a common higher goal.